The Florida Economy in 2007

The Florida Economy in 2007 Although final data for 2006 are not yet available, it appears Florida’s economy experienced solid, but not spectacular, g...
Author: Agnes Dawson
1 downloads 2 Views 209KB Size
Report
Download PDF

The Florida Economy in 2007 Although final data for 2006 are not yet available, it appears Florida’s economy experienced solid, but not spectacular, growth last year. As 2006 unfolded, economic activity decelerated from the record-setting pace recorded in 2003 - 2005, owing largely to a deepening statewide housing market slump and the gradual winding down of hurricane-related repair and restoration work. At the same time, continued hefty population gains and healthy tourism, international trade, and services sectors combined to provide strong growth in jobs and incomes throughout Florida. This issue of Economic Commentary presents our 2007 outlook for the Florida economy. In brief, we see the expansion in the state’s economy being sustained in 2007, but at a noticeably reduced pace of growth. Interest rates, the course of the national economy, and population increases are key variables in our forecast. We start with a brief assessment of the U.S. and international economies, as the outlook for Florida is obviously tied to developments in the national and global economies. The U.S. and Global Economies: Soft or Hard Landing?

Judged by gains in employment and GDP, U.S. economic growth has clearly moderated in recent months. The salient issue for 2007 is whether or not this moderate expansion will persist, or, instead, give way to an outright economic recession. Historically, so-called soft landings (reductions in the inflation rate while the economy continues to advance, albeit at a slower rate) have proven difficult to achieve. Slower growth makes the economy even more vulnerable to adverse shocks, and further exposes any imbalances in key sectors. Moreover, the long-term tendency of the Federal Reserve has been to keep monetary policy ‘too tight for too long’ and to flirt with – if not push – the economy into

recession in the process. Additionally, uncertainties about the thrust of the new Congress’ economic legislation may induce a "wait and see" attitude from some business leaders regarding expansion and investment decisions. Productivity-boosting capital expenditures, consumer spending, and new home construction, all within an environment of relatively low interest rates, had been the driving forces behind the considerable expansion of the U.S. economy. However, higher interest rates contributed to the national decline in housing markets, consumer spending growth has likely peaked, and capital expenditure growth has flattened. These factors suggest a more subdued national economy in 2007 and, as mentioned above, a greater threat of recession. Assuming the soft landing materializes, short–term interest rates could begin to decline in the second half of 2007. Global economic growth also appears to be easing at the start of 2007. The boom in raw materials, commodities, and industrial materials that had spurred growth in Latin America and the Caribbean has at least temporarily moderated. Additional expansion in this somewhat fragile region is unlikely in 2007. In contrast, the European Union countries may enjoy slightly more growth in 2007. Asia will remain the global growth leader, though the pace of growth in China and India should slacken from the torrid rates of the last decade. Japan, however, is poised for an acceleration of growth. The 2007 Florida Outlook The slowdowns anticipated for the national and global economies have important implications for Florida in 2007. Diminished national and global economic growth may shave some of the expansion in the state’s tourism sector and further constrain housing demand from out-of-state buyers. At the same time, an expected decline in the foreign exchange value of the U.S. dollar may boost Florida’s export sectors, including the agriculture and mining industries. Reductions in short-term maturity interest rates are anticipated to

Reductions in short-term maturity interest rates are anticipated to begin in the second half of 2007. Our outlook for Florida is sensitive to this assumption, for it is a key to limiting, but not necessarily ending, the sharp recession in the state’s housing markets.

The data in the accompanying table provide a glimpse of the magnitude of the recession in the state’s housing market. On the 'supply side’, new housing starts appear to have plunged a whopping 25 percent in 2006 and, in dollar terms, dropped by roughly $10 billion. Florida’s construction sector alone accounts for roughly seven percent of the state’s economy (versus about four percent nationwide), and when related industries such as real

estate, finance, and retailing are included, the figure may approach 10 percent or in the neighborhood of $70 billion per year. An additional falloff in housing starts and complementary activity of roughly 15 percent in 2007 will cut about $12 billion, or 1.70 percent, from the state’s economy this year. The data are perhaps even more sobering when examined from the 'demand side’. Existing home sales in Florida, through the third quarter of 2006, contracted by about 33 percent on an annualized basis compared to an 11 percent nationwide drop. New home sales in the South census region (state level data are not reported) declined about 12 percent during the first eleven months of 2006. Residential real estate prices have clearly weakened in the midst of the housing recession, although the data are somewhat conflicting. Median prices for existing home sales in 2006 fell in four of the twelve Florida markets tracked by the National Association of Realtors, including the Miami-Dade - Broward, Cape Coral - Ft. Meyers, Palm Bay - Melbourne, and Sarasota regions. The Florida index of same home resales prepared by OFHEO shows that prices in the third quarter of 2006 inched up only 1.15 percent from the second quarter, although they were up 15.11 percent for the twelve months ending in the third quarter of 2006. This annualized increase, however, is roughly half that recorded over the previous three years. Moreover, all of the 21 Metropolitan Statistical Areas (MSAs) included in the OFHEO index show substantial slowdowns in the rate of price appreciation. Weakness in residential real estate values will also limit Florida’s economic growth in 2007 via a so-called wealth effect. Housing is the single largest and most valuable asset for many households. The doubling of Florida housing prices over the last five years (a 112% increase) boosted household wealth, which, in turn, supported increased household spending on a wide range of goods and services. As household wealth based on higher housing prices moderates, then so should the stimulus to the economy from additions to household spending. While some analysts are of the view that the national housing slump is at or near bottom, this is less likely to be the case in Florida. From 2003 to 2006, the number of households, the primary home buying and renting unit in Florida, increased by roughly 695,000. The number of new housing starts totaled about 938,000 during this period. The 243,000 excess of housing starts versus households is a crude measure of the housing surplus based on population and household growth. It represents approximately an entire year’s supply of

new housing units. This surplus must be reduced considerably before the housing sector can rebound. Lower interest rates, greater household formation, faster population growth, and increased second home and investor demand will be required to absorb the surplus and constrain the weakness in housing prices. Data provided by the National Association of Realtors suggests roughly 25 percent of housing demand in Florida in recent years has come from second home buyers and investors. Slower national and international economic growth and prospects for diminished price appreciation are likely to curb these sources of demand. National Association of Realtors data also indicate close to 40 percent of recent home mortgages in Florida have been the adjustable interest rate variety, where the annual mortgage rate and mortgage payment are tied to a shorter-term interest rate, such as the one-year maturity Treasury bill index. If, as we expect, short-term interest rates decline in the second half of 2007, then additional buyers, both primary and second home, will likely be attracted to the housing market and existing mortgage holders will see lower mortgage payments and have cash released for other uses. Interest rates are thus a key factor in our 2007 outlook. However, softening real estate prices and lower interest rates may not make much of a dent in Florida's affordable housing situation - at least in 2007. Sustained growth in incomes and, as we have written before, progress on state and local regulatory issues will be required to address housing affordability. Beyond the housing sector and its related industries, the Florida economy appears poised for another year of solid, if unspectacular, growth. Despite the housing recession, Florida had the fastest job growth and lowest unemployment rate of the ten most populous states in 2006. Population gains in 2007 are likely to moderate from the robust levels of recent years, but will still be sufficient to propel gains in a variety of services, health care, and retailing industries. The tourism sector is likely to continue growing, but also at a more modest pace. International trade, especially the export of goods and services, should benefit from a declining foreign exchange value of the dollar. International investment in Florida may also benefit from a lower dollar. Florida’s business climate remains attractive for entrepreneurs, existing businesses seeking to expand, and businesses considering investing in Florida. Business climates can change rather quickly, however, so enhancing the state’s attractiveness for business requires constant attention. Fiscally, Florida now has a legacy of fiscal discipline. Other states, at times in the past, have sacrificed their fiscal discipline when their economies have slowed, have had difficulty recapturing it, and have seen their economies erode in the process. Florida would be wise to avoid this trap. At the same time, some local governments may experience substantial challenges adjusting to slower growth in property tax revenues associated with slumping housing markets. Legislative actions addressing inequities on residential and commercial property taxation, as well as escalating property insurance premiums will be important to Florida's near and longer-term economic health in these regards. Coming Next Month: Issues to the South and Florida By Stephen O. Morrell, Ph.D., Florida TaxWatch Senior Research Fellow and Professor of Economics and Finance, Andreas School of Business, Barry University, Miami Shores. The TaxWatch Center for Competitive Florida...Resolving issues vital to Florida´s global economic competitiveness. Victoria Zepp, Executive Director, 850-212-5794, [email protected]

A GLOBALLY COMPETITIVE FLORIDA Regional Opportunities in the Next Economy

END_OF_DOCUMENT_TOKEN_TO_BE_REPLACED 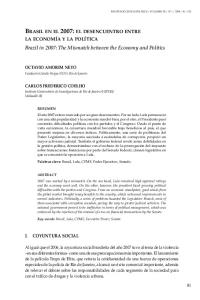 Brazil in 2007: The Mismatch between the Economy and Politics

END_OF_DOCUMENT_TOKEN_TO_BE_REPLACED

Recession Looms for the U.S. Economy in 2007

END_OF_DOCUMENT_TOKEN_TO_BE_REPLACED

The Economy in Transition

END_OF_DOCUMENT_TOKEN_TO_BE_REPLACED

IN THE FLORIDA SUPREME COURT

END_OF_DOCUMENT_TOKEN_TO_BE_REPLACED

China in the Global Economy

END_OF_DOCUMENT_TOKEN_TO_BE_REPLACED

The Shadow Economy in Europe

END_OF_DOCUMENT_TOKEN_TO_BE_REPLACED

Opportunities in the digital economy

END_OF_DOCUMENT_TOKEN_TO_BE_REPLACED

The Equitable Lien in Florida

END_OF_DOCUMENT_TOKEN_TO_BE_REPLACED

The Banana in Florida 1

END_OF_DOCUMENT_TOKEN_TO_BE_REPLACED

America In the Global Economy

END_OF_DOCUMENT_TOKEN_TO_BE_REPLACED

Agriculture in the National Economy

END_OF_DOCUMENT_TOKEN_TO_BE_REPLACED

Investing in the Care Economy

END_OF_DOCUMENT_TOKEN_TO_BE_REPLACED

Investing in the blue economy

END_OF_DOCUMENT_TOKEN_TO_BE_REPLACED

Australia in the Global Economy

END_OF_DOCUMENT_TOKEN_TO_BE_REPLACED

Africa in the World Economy

END_OF_DOCUMENT_TOKEN_TO_BE_REPLACED

Materials in the Dutch Economy