SENSOR-BASED ROBOT CONTROL Robotics has matured as a system integration engineering field defined by M. Bradley as “the intelligent connection of the perception to action”. Programmable robot manipulators provide the “action” component. A variety of sensors and sensing techniques are available to provide the “perception”.

t ROBOTIC SENSING Since the “action” capability is physically interacting with the environment, two types of sensors have to be used in any robotic system: -

Data from multiple sensors may be further fused into a common representational format (world model).

Finally, at the perception level, the world model is

analyzed to infer the system and environment state, and to assess the consequences of the robotic system’s actions. 1. Proprioceptors From a mechanical point of view a robot appears as an articulated structure consisting of a series of links interconnected by joints. Each joint is driven by an actuator which can change the relative position of the two links connected by that joint.

Proprioceptors are sensors measuring both kinematic and dynamic

parameters of the robot. Based on these measurements the control system activates the actuators to exert torques so that the articulated mechanical structure performs the desired motion. The usual kinematics parameters are the joint positions, velocities, and accelerations.

Dynamic parameters as forces, torques and inertia are also

important to monitor for the proper control of the robotic manipulators.

synchros and resolvers, encoders, RVDT (rotary variable differential transformer) and INDUCTOSYN. The most accurate transducers are INDUCTOSYNs (+ 1 arc second), followed by synchros and resolvers and encoders, with potentionmeters as the least accurate. Encoders are digital position transducers which are the most convenient for computer interfacing.

which generate a number of pulses proportional with the traveled rotation angle. They are less expensive and offer a higher resolution than the absolute encoders. As a disadvantage, incremental encoders have to be initialized by moving them in a reference (“zero”) position when power is restored after an outage. Absolute shaft encoders are attractive for joint control applications because their position is recovered immediately and they do not accumulate errors as incremental encoders may do.

(natural binary, Gray, BCD) marked on each quantization interval of a rotating scale. The absolute position is recovered by reading the specific code written on the quantization interval that currently faces the encoder reference marker. The number of code tracks on the scale increases proportionally with the desired measuring resolution, limiting the encoder’s resolution. This can be avoided by using pseudo-random encoding which permits absolute encoders needing only one code track. Joint position sensors are usually mounted on the motor shaft. When mounted directly on the joint, position sensors allow feedback to the controller with the joint backlash and drive train compliance parameters. Angular velocity is measured (when not calculated by differentiating joint positions) by tachometer transducers. A tachometer generates a DC voltage proportional to the shaft'’ rotational speed. Digital tachometers using magnetic

pickup sensors are replacing traditional, DC motor-like tachometers which are too bulky for robotic applications. Acceleration sensors are based on Newton’s second law.

measuring the force which produces the acceleration of a known mass. Different types of acceleration transducers are known: stress-strain gage, piezoelectric, capacitive, inductive. Micromechanical accelerometers have been developed. In this case the force is measured by measuring the strain in elastic cantilever beams formed from silicon dioxide by an integrated circuit fabrication technology. Strain gages mounted on the manipulator’s links are sometimes used to estimate the flexibility of the robot’s mechanical structure. Strain gages mounted on specially profiled (square, cruciform beam or radial beam) shafts are also used to measure the joint shaft torques. 2. Exteroceptors Exteroceptors are sensors that measure the positional or force-type interaction of the robot with its environment. Exteroceptors can be classified according to their range as follows: -

proximity (“near to”) sensors

2.1 . Contact Sensors Contact sensors are used to detect the positive contact between two mating parts and/or to measure the interaction forces and torques which appear while the robot manipulator conducts part mating operations. Another type of contact sensors are the tactile sensors which measure a multitude of parameters of the touched object surface.

Force/Torque Sensors The interaction forces and torques which appear, during mechanical assembly operations, at the robot hand level can be measured by sensors mounted on the joints or on the manipulator wrist. The first solution is not too attractive since it needs a conversion of the measured joint torques to equivalent forces and torques at the hand level. The forces and torque measured by a wrist sensor can be converted quite directly at the hand level. Wrist sensors are sensitive, small, compact and not too heavy, which recommends them for force controlled robotic applications. A wrist force/torque has a radial three or four beam mechanical structure. Two strain gages are mounted on each deflection beam. Using a differential wiring of the strain gages, the four -beam sensor produces eight signals proportional with the force components normal to the gage planes. Using a 6-by-8 “resolved force matrix”, the eight measured signals are converted to a 6-axis force/torque vector. Tactile Sensing Tactile sensing is defined as the continuous sensing of variable contact forces over an area within which there is a spatial resolution. Tactile sensing is more complex than touch sensing which usually is a simple vectorial force/torque measurement at a single point. Tactile sensors mounted on the fingers of the hand allow the robot to measure contact force profile and slippage, or to grope and identify object shape. The best known of tactile sensor technologies are: conductive elastomer, strain gage, piezoelectronic, capacitive and optoelectronic. These technologies can be further grouped by their operating principles in two categories: force-sensitive and displacement-sensitive. The force-sensitive sensors (conductive elastomer, strain gage and piezoelectric) measure the contact forces, while the displacement-sensitive (optoelectronic and capacitive) sensors measure the mechanical deformation of an elastic overlay.

Tactile sensing is the result of a complex exploratory perception act with two distinct modes. First, passive sensing, which is produced by the “cutaneous” sensory network, provides information about contact force, contact geometric profile and temperature.

sensory information with “kinesthetic” sensory information (the limb/joint positions and velocities). While the tactile sensor (probe) itself provides the local cutaneous information, the robotic manipulator provides the kinesthetic capability which moves the tactile probe around on the explored object surface. The sequence of local cutaneous data frames is integrated with the kinesthetic position parameters of the manipulator resulting in a global tactile image (geometric model) of the explored object. Various multi-sensor fusion techniques are available for this integration process. 2.2 . Proximity Sensors Proximity sensors detect objects which are near but without touching them. These sensors are used for near-field (object approaching or avoidance) robotic operations.

Proximity sensors are classified according to their operating

principle; inductive, hall effect, capacitive, ultrasonic and optical. Inductive sensors are based on the change of inductance due to the presence of metallic objects.

Hall effect sensors are based on the relation which exists

between the voltage in a semiconductor material and the magnetic field across that material.

Inductive and Hall effect sensors detect only the proximity of

ferromagnetic objects. Capacitive sensors are potentially capable of detecting the proximity of any type of solid or liquid materials. Ultrasonic and optical sensors are based on the modification of an emitted signal by objects that are in their proximity.

2.3 . “Far Away” Sensing Two types of “far away” sensors are used in robotics: range sensors and vision. Range Sensing Range sensors measure the distance to objects in their operation area. They are used for robot navigation, obstacle avoidance or to recover the third dimension for monocular vision. Range sensors are based on one of the two principles: time-of-flight and triangulation. Time-of-flight sensors estimate the range by measuring the time elapsed between the transmission and return of a pulse. Laser range finders and sonar are the best known sensors of this type. Triangulation sensors measure range by detecting a given point on the object surface from two different points of view at a known distance from each other. Knowing this distance and the two view angles from the respective points to the aimed surface point, a simple geometrical operation yields the range.

Vision Robot vision is a complex sensing process. It involves extracting, characterizing and interpreting information from images in order to identify or describe objects in environment. A vision sensor (camera) converts the visual information to electrical signals which are then sampled and quantized by a special computer interface electronics yielding a digital image. Solid state CCD image sensors have many advantages over conve ntional tube-type sensors as: small size, light weight, more robust, better electrical parameters, which recommends them for robotic applications. Currently, there is a multitude of commercial computer interface boards (“frame buffers”) providing 512-by-512 digital images with 8 bit/pixel at

standard TV video-rate (single frame time of 1/30 sec). Virtually all existent vision sensors are designed for television which is not necessarily best suited for robotic applications.

Because of the reduced resolution, parallax errors, and

robot hand obstructing the field of view, the common wisdom approach of placing camera above the working area is of questionable value for many robotic applications.

solution which eliminates these problems. Illumination is a very important component of the image acquisition. Controlled illumination offers expedient solutions to many robotic vision problems. Backlighting enhances the contract to a level which simplifies further image processing. In structured lighting, special light stripes, grids or other patterns are projected on the scene. The shape of the projected patterns on different objects offers valuable cues from which to recover 3-D object parameters from a 2-D image. Strobe lighting with high-intensity short pulses may be used to reduce the negative effect of ambient light or eliminate the effect of object motion. The digital image produced by a vision sensor is a mere numerical array which has to be further processed till an explicit and meaningful description of the visualized objects finally results. Digital image processing comprises more steps: preprocessing,

Preprocessing techniques usua lly deal with noise reduction and detail enhancement. Segmentation algorithms, like edge detection or region growing, are used to extract the objects from the scene. These objects are then described by measuring some (preferably invariant) features of interest. Recognition is an operation which classifies the objects in the feature space. Interpretation is the operation that assigns a meaning to the ensemble of recognized objects.

maintain a model of relationships between the references to the actuators and their consequential movements using measurements made by the internal sensors;

maintain a model of the environment using the exteroceptor sensor data;

plan the seque nce of steps required to execute a task;

control the sequence of robot actions in response to perform the task;

adapt robot’s actions in response to changes in the external environment;

Robot controller can have a multi-level hierarchical architrcture: 1. Artificial intelligence level, where the program will accept a command such as, ‘Pick up the bearing ‘ and decompose it into a sequence of lower level commands based on a strategic model of the task. 2. Control mode level where the motions of the system are modelled, including the dynamic interactions between the different mechanisms, trajectories planned, and grasp points selected. From this model a control strategy is formulated, and control commands issued to the next lower level. 3. Servo system level where actuators control the mechanism parameters using feedback of internal sensory data, and paths are modified on the basis of external sensory data.

are implemented at this level.

END_OF_DOCUMENT_TOKEN_TO_BE_REPLACED

Design and Control of a Humanoid Robot

END_OF_DOCUMENT_TOKEN_TO_BE_REPLACED

Identification and control of a pneumatic robot

END_OF_DOCUMENT_TOKEN_TO_BE_REPLACED 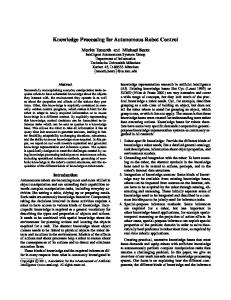 END_OF_DOCUMENT_TOKEN_TO_BE_REPLACED

Predictive Fuzzy Control for a Mobile Robot with Nonholonomic Constraints

END_OF_DOCUMENT_TOKEN_TO_BE_REPLACED

Dynamic Modeling and Control of a Car-Like Robot

END_OF_DOCUMENT_TOKEN_TO_BE_REPLACED

A Study of Control of Self Balancing Robot System

END_OF_DOCUMENT_TOKEN_TO_BE_REPLACED

Variational Methods for Control and Design of Bipedal Robot Models

END_OF_DOCUMENT_TOKEN_TO_BE_REPLACED

Simulation and Control of a Two-wheeled Self-balancing Robot