Polycystic Ovarian Syndrome Randine Lewis, Ph.D., Lic.Ac. Polycystic Ovarian Syndrome, or PCOS, has also been known by the name Stein-Leventhal Syndrome, and includes a multi system presentation, having its effects on the skin, hair, body weight, endocrine system, and reproductive system. It is said to affect up to ten percent of women of reproductive age, and up to ninety percent of woman with irregular menstrual cycles. PCOS was first recognized as a medical disease or syndrome in the West in 1845 in France. Its most distinctive sign is the pathologic appearance of sclerocystic changes on the larger than average ovaries, which appeared to have a thick, shiny, white coating overlying many rows of cysts on the surface of the ovary. These ovarian changes give PCOS its name. In 1990 a National Institute of Health conference decided the two most consistent elements which comprise the disorder of PCOS include elevated androgenic hormones and chronic lack of ovulation. Yet PCOS has a multitude of other symptoms as well, including obesity, acne, facial hair and increased body hair, and thinning of the hair on the head. Most of the symptoms of PCOS are caused by the state of the ovary. The capsule of the ovary is thickened and waxy. Multiple small cysts exist inside the ovary which are not the same as active follicles, but have been arrested in their development. These cysts and the connective tissue surrounding them, the stroma, produce male hormones called androgens. Testosterone is very similar in chemical composition to estrogen, but it causes the male type effects so often seen in PCOS. The brain detects circulating levels of sex hormone, and inhibits ovulation accordingly. Luteinizing hormone is often elevated higher than FSH in a woman with PCOS, and remains elevated throughout the cycle. LH stimulates the cells of the ovary to produce androgens, which block follicular development, causing the follicles to degenerate. This process is thought to be a result of an altered feedback mechanism within the hypothalamic - pituitary - ovarian axis, and makes ovulation unlikely. Impaired glucose tolerance and insulin abnormalities are also a factor in many cases of PCOS, and have to do with another endocrine gland, the pancreas. Insulin resistance affects ovulation by producing higher amounts of circulating insulin, which stimulates the activity of

higher amounts of circulating insulin, which stimulates the activity of enzymes which help to manufacture androgens in the ovary. High insulin levels further may cause overstimulation of androgen receptors, leading to follicular atresia of developing eggs. The etiology of this disease remains unknown. Doctors and scientists have been unable to pinpoint the actual causative factor, and thus have been unable to treat it effectively. Woman with PCOS are at risk for other health hazards like disorders in lipid metabolism, obesity and its health concerns, vascular disease and cancer. So, how does PCOS affect fertility? By affecting the ability to ovulate. Less estrogen is produced, but more LH and testosterone. This affects not only the quality of the follicle, but also the state of the endometrium. As a result, menstrual cycles become more erratic and less predictable. Women with PCOS will often very long cycles and very heavy bleeding; or amenorrhea, or anovulation with scanty bleeding. (Each presentation, by the way, is addressed using different treatment protocols with Oriental Medicine.) When an egg is released, it is often released later in the cycle, and it is of poorer quality because of the surroundings in which it has been developing. Remember that follicular development is a process that takes approximately one hundred days within the ovary. Eggs are meant to develop in an estrogen and progesterone rich environment, not in an androgenic setting. Women diagnosed with polycystic ovarian syndrome historically do not respond positively to Western assisted reproductive techniques including in-vitro procedures; nor do they respond well to Clomid alone, or any hormonal manipulation which does not address the state of the ovary's endocrine milleau over the previous three or more months of development. If they do become pregnant, they are at higher risk of miscarriage, again presumably because of the health of the egg and therefore the developing embryo. Chinese medicine seeks to redress the entire hormonal milleau.

They all have manifestations in the way in which the body ovulates,

They all have manifestations in the way in which the body ovulates, however. Most women with PCOS ovulate later in the cycle, if at all. Going back to the diagnostic checklist, you may categorize yourself into any combination of the diagnostic categories. Treatment will be based upon these differentiations.

Treatment Treatment must first and foremost be based upon your individual diagnostic pattern. Follow the dietary guidelines for PCOS (below). Do the following exercise to increase blood flow to the ovaries: Femoral Massage [This exercises increases the blood flow to the pelvic organs, providing more nourishment to the uterus and ovaries.] Compress (or have your partner compress) the large artery just beneath the crease in your groin between your thigh and lower abdomen. This is the femoral artery, which comes from the iliac artery. The iliac artery gives off branches which supply blood flow to the uterus, fallopian tubes and ovary. (The ovary has an additional blood supply which branches off the same arterial section that supplies the kidneys.) When the flow has ceased and you feel the pulsation end at your finger tips, hold for 30-45 seconds. The blood is now backing up and increasing the pressure gradient in the iliac arteries and forcing more blood into the pelvic arteries, flooding the pelvic organs with more blood. When the hold is released, you should feel a sensation of warmth rushing down your leg as the blood supply returns to the lower extremity. Perform the femoral massage three times, twice daily. NOTE: Do not perform this exercise if you are pregnant. If you have high blood pressure, heart disease or circulatory problems including aneurisms, varicose veins, phlebitis, thrombosis, or a history of strokes or detached retinas, do not practice these techniques. If you have diabetes or similar disorder which affects the circulation, but can perform normal exercises and daily routines, practice on one side at a time and repeat on the opposite side. Perform the femoral massage three times on each side, twice daily if possible. If you will be l supplementing with herbs, include Gleditsia during the first half of your menstrual cycle, before ovulation. Gleditsia is categorized as a phlegm resolving medicinal in Chinese Medicine, and is known to dissolve the waxy capsule around the ovaries, and it promotes ovulation. Leonurus Fruit is a blood quickening medicinal with an inherent effect of encouraging ovulation in those who have any element of blood stasis. Women with ovulatory pain have blood stasis on ovulation. Anovulatory women should begin to notice signs of ovulation after a couple months of treatment. Women with belated ovulation will often notice that their ovulation comes earlier and earlier in the cycle until they ovulate normally on cycle day fourteen.

they ovulate normally on cycle day fourteen. Most women with PCOS also have endocrine abnormalities which are affected by diet.

Dietary Therapy If you are overweight, this condition responds much better to weight loss. Fat cells store estrogen, and there is usually relatively too much circulating estrogen and LH in women with PCOS. The liver metabolizes these hormones, so a healthy functioning liver is mandatory for proper therapeutic effect. Include dietary sources of the B vitamins, which keep the liver healthy. Because of the insulin resistance and impaired glucose metabolism found in PCOS, it is very important to modify dietary intake if you have this condition. Insulin is a hormone secreted by the beta cells of the pancrease and is designed to maintain the blood glucose level within a certain range. Insulin stores glucose in the form of fat. Insulin resistance means that the body's response to insulin in various tissues is impaired. Hence, the pancreas secretes more insulin. When the body fails to respond to insulin, glucose intolerance and diabetes and its many complications may become the eventual result. The best natural management for insulin resistance and impaired glucose metabolism is to lower the level of sugar intake from the diet, and eliminate the ingestion of any food substance that the body can utilizes as simple sugar. Cut out all forms of refined sugar Cut out all forms of refined carbohydrates. The body immediately turns these into sugar. This includes white bread, pasta, Do not adhere to the fertility diets that advocate massive yam consumption. This can actually delay or prevent ovulation if you Avoid soda, fruit juice, and any drink which rapidly raises the blood sugar level. Consume adequate amounts of protein, either in vegetarian form or in the form of lean meat which has not been treated Eat as many fresh vegetables as you wish. Eat only complex, whole grains. Eat fruits like berries which are not too sweet. Avoid milk and dairy products which tend to exacerbate the condition of internal dampness.

Avoid milk and dairy products which tend to exacerbate the condition of internal dampness. Eliminate alcohol and caffeine. Increase your dietary fiber intake. Exercise. A Swedish/Italian controlled study from the Biology of Reproduction Journal, (date): involved inducing a state of poly cystic ovaries in rats, with injections of estradiol valerate. Increased activity of the sympathetic nervous system resulted, followed by increased concentrations of nerve growth factor in ovaries, and the adrenal glands. Within 60 days the rats developed polycystic ovaries. The control group received no therapy and maintained features of PCOS. Those treated with acupuncture showed a reduction in the hyperactivity of the ovarian peripheral sympathetic nerve fibers, reduction of the increased nerve growth factor concentrations within the ovaries to normal and reduced the weight of the poly cystic ovaries. This group of doctors then set out with the aim of reproducing similar results in women with PCOS. The study concluded, "We have shown that repeated electroacupuncture treatments restore regular ovulations in the anovulatory women with PCOS. In addition, acupuncture influenced neruoendocrine and endocrine parameters indicative of PCOS, such as LH/FSH ratios, mean testosterone concentrations, and beta-endorphin concentrations, which reduced significantly." This study illustrates the hormonal origin of this disease process, and the fact that it can be induced artificially. The induction of this hormonal trauma produces a physiologic state of stress which raises the activity of the sympathetic nervous system, producing a disease syndrome. Acupuncture treatments were effective at resolving this pathologic process because it reduces the level of hypersympathetic nervous system response, relaxing the whole neuroendocrine system.

END_OF_DOCUMENT_TOKEN_TO_BE_REPLACED

Relation between CYP17 Polymorphism and Hyperandrogenemia in Polycystic Ovarian Syndrome

END_OF_DOCUMENT_TOKEN_TO_BE_REPLACED

A CRITICAL REVIEW ON POLYCYSTIC OVARIAN SYNDROME IN

END_OF_DOCUMENT_TOKEN_TO_BE_REPLACED

Birth weight in offspring of mothers with polycystic ovarian syndrome

END_OF_DOCUMENT_TOKEN_TO_BE_REPLACED

The Impact of Polycystic Ovarian Syndrome on Gestational Diabetes

END_OF_DOCUMENT_TOKEN_TO_BE_REPLACED 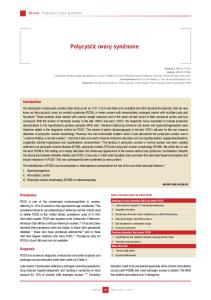