American Idol Finale April 7, 2016 The finale of the farewell season hosted by Ryan Seacrest, the top three finalists await their fate in the live shows from the Dolby Theatre. Joined by previous Idols including Kelly Clarkson, the 15th American Idol is crowned, with help from judges Jennifer Lopez, Keith Urban & Harry Connick Jr.

The Bachelor March 14, 2016 Tempers flare, as the most memorable women are back to confront Ben and tell their side of the story. The confident Olivia returns to have her chance to defend herself. Caila shares the devastating ending to her love story. Jubilee & Amanda attempt to get closure to their heart-wrenching breakups.

The Big Bang Theory The Celebration Experimentation February 25, 2016 In our 200th episode, Amy convinces Sheldon to celebrate his birthday for the first time since his childhood. The group plans a birthday party for him, convincing celebrated Batman actor Adam West to attend. But when Sheldon enters the party he is overcome with anxiety.

Big Brother Big Brother Double Eviction August 13, 2015 An entire week's worth of Big Brother in one live hour with a new Head of Household, an HoH competition, nominations, a Power of Veto competition, and a second eviction!

Celebrity Family Feud 101 June 21, 2015 Celebrity Family Feud takes fun to another level, over a six-episode series with host Steve Harvey. Celebrities from the world of entertainment & sports compete against each other, in a contest to name the most popular responses to a survey-type question posed to 100 people, to win money for charity.

Chelsea Christina Aguilera & Chelsea On Ice May 20, 2016 Chelsea reaches for a big note with the Grammy-winning "Voice" coach and steps into the rink with a pair of Russian figure skaters.

Dancing With The Stars The Finals - Season Finale Part 2 November 24, 2015 30 cameras, over 2 dozen production numbers! Dancers and hosts racing back and forth between 2 stages nearly a mile apart. A live studio audience of over 25,000. Snowfall in Los Angeles! And the best dance performances of the season. All LIVE!!!

Full Frontal With Samantha Bee Episode #1008 April 11, 2016 Samantha Bee explains the purpose of superdelegates beyond enraging conspiracy theorists, reports on the struggles poor parents face getting diapers, and tries getting her hands on the NRA's delightfully creepy mascot costume. Plus: Gun TV. Like QVC, but with a much higher potential body count.

Fuller House Mad Max February 26, 2016 When an old friend whisks her away for a concert and after-hours fun, Stephanie realizes just how much her nephews mean to her. Kimmy finds DJ a date.

Girlfriends' Guide To Divorce Rule #605: You CAN Go Home Again December 22, 2015 Abby and Jake decide to finally define their relationship status by spending a weekend at home without work, friends and the kids. Phoebe reconnects with friends from her modeling days. Delia and fiancé Gordon go house hunting, but discover that they both want very different things.

Little Big Shots starring Steve Harvey Little Bruce Lee March 8, 2016 In this premiere episode, Steve Harvey goes toe-to-toe with a 4-year-old basketball phenomenon, a 5-year-old mini Bruce Lee and an incredible young singing duo who sing, "You Raise Me Up," as well as an enthusiastic spelling bee champ and a sassy dancer, Johanna, who became an Internet sensation.

Mom Beast Mode And Old People Kissing April 21, 2016 Jodi's boyfriend, who was with her when she overdosed, shows up at a meeting. Christy struggles to show him the compassion he needs. Bonnie's new boyfriend thinks she spends too much time at meetings. To convince him otherwise, Bonnie shows him video of her out of control.

Monday Night Raw It's A New Day April 4, 2016 Shane McMahon gets to run Monday Night RAW. Superstars compete in a Fatal 4-Way Match for a shot at the WWE World Heavyweight Championship.

The Nightly Show with Larry Wilmore 1103 September 9, 2015 Larry Wilmore covers the Syrian Refugee Crisis. He chats with contributor, Holly Walker as she runs through a field reporting from the Serbian border, but she is really in Iowa. Larry dressed as an astronaut interviews his childhood hero Buzz Aldrin "in space" about his book.

Odd Mom Out Brooklandia June 29, 2015 Jill ventures to Brooklyn with Vanessa for a backyard party. Disillusioned by her Upper East Side neighborhood, Jill immediately falls in love with the down-to-earth moms and homemade bread that people actually eat. However, as the day progresses, Jill realizes the grass may not be greener on the other side.

The Ranch Better As A Memory April 1, 2016 Abby gets a taste of her own medicine after a hazy night of drinking. Beau warms to the idea of mending fences with Maggie.

Real Time With Bill Maher 1401 January 15, 2016 Bill Maher started the show with a one on one discussion on climate and the election with Al Gore. He then led a live roundtable discussion recapping the week's news with Dr. Cornel West, Nicolle Wallace and John Krasinski. The show ended as always with "New Rules" and an editorial.

Saturday Night Live Host: Ariana Grande March 12, 2016 In her monologue, Ariana sings about what her next scandal could possibly be. Parodies include The Kid's Choice Awards Countdown Show; Family Feud; Ariana as a beautiful mermaid; and as an intern at Tidal who does celebrity singer impressions when the service goes down. Two live performances by Ariana.

The Tonight Show Starring Jimmy Fallon Episode 325 September 9, 2015 The Tonight Show Starring Jimmy Fallon invited Justin Timberlake and Ellen DeGeneres to be his guests. Justin and Jimmy performed a medley of songs to open the show: the History of Hip-Hop 6. Jimmy, Justin and Ellen did a Lip Sync Battle plus Macklemore & Ryan Lewis performed "Downtown".

The Voice 917A - Live Semi-Final Performances December 7, 2015 Nine remaining artists must give their best performances yet to secure one of the four coveted spots in next week's finale. Blake Shelton and Ellie Goulding perform.

Young & Hungry Young & Coachella February 10, 2016 Gabi(Emily Osment)takes her food truck to the Coachella music festival, but confronts troubles on the road and in her love life.

Amy Schumer: Live At The Apollo October 17, 2015 Schumer's provocative, hilariously wicked mind is on full display as she headlines her first HBO stand-up comedy special - Amy Schumer: Live at the Apollo, directed by Chris Rock and taped live before a sold-out crowd at the legendary Apollo Theater.

CONAN In Korea April 9, 2016 Conan visits South Korea, where he is set upon by fans, masters the language as well as taekwondo, cameos in a soap opera, visits a PC bang, adopts an octopus, and hooks up with Steven Yeun to crash the DMZ, visit a Buddhist temple, and star in a K-pop video.

Danny Elfman's Music From The Films Of Tim Burton (Live From Lincoln Center) October 30, 2015 Danny Elfman descends on Lincoln Center with an 88-piece orchestra, a 44-person choir, and a few very special guests. This celebration of the weirdness and wonder of Elfman and Burton's collaborations includes film clip montages imaginatively blended with the live orchestral show culminating with a spectacular performance from Elfman himself.

Il Trovatore (Great Performances At The Met) January 22, 2016 Anna Netrebko takes on the role of Leonora for the first time at the Met, opposite Dmitri Hvorostovsky as Count di Luna, Dolora Zajick as Azucena, and Yonghoon Lee as Manrico. David McVicar's production is conducted by Marco Armiliato.

Invictus Games Orlando 2016 Opening Ceremony May 8, 2016 Through inspiring live storytelling the Invictus Games Opening Ceremony paid tribute to the service and sacrifice of Wounded Warriors from 14 nations. The Ceremony shone a light on the plight of those who are living with invisible injuries of war, encouraging them to take the critical step of seeking help.

J. Cole Forest Hills Drive: Homecoming January 9, 2016 J. Cole performs in his hometown of Fayetteville, NC for the last stop of his Forest Hills Drive Tour. Along with anecdotes and observations from his fans, family, and locals who eagerly welcome back their hometown hero, Cole tells his compelling life story and reminisces about his upbringing and influences.

John Mulaney: The Comeback Kid November 13, 2015 Armed with boyish charm and a sharp wit, the former "SNL" writer offers sly takes on marriage, his beef with babies and the time he met Bill Clinton.

Lady Day At Emerson's Bar & Grill March 12, 2016 Through the songs that made her famous and the personal, painful, revelations she shares during an intimate performance in 1959, LADY DAY AT EMERSON'S BAR & GRILL reveals the tumultuous life of jazz icon Billie Holiday. This film exposes her genius, and the demons that undermined her life's story.

The Merry Widow (Great Performances At The Met) June 19, 2015 Renée Fleming in the title role leads the cast of Lehár's most popular operetta, seen in a production by Broadway director and choreographer Susan Stroman. Kelli O'Hara, Nathan Gunn, and Thomas Allen co-star, with maestro Andrew Davis on the podium.

The Oscars February 28, 2016 A three-and-a-half hour global broadcast, honoring actors and filmmakers, hosted by Chris Rock, televised in the U.S. and more than 100 countries from Albania to Western Samoa, featuring 24 awards from sound editing to best picture.

The Passion March 20, 2016 THE PASSION tells the 2000-year-old story of the last hours of Jesus Christ. Including popular music sung by the cast and arranged specifically for this event. Set in modern day, its the dramatic story of Jesus, whose betrayed by Judas, put on trial by Pontius Pilate, convicted, crucified and resurrected.

The Price Is Right Primetime Special: Big Brother Edition May 24, 2016 The Price is Right with Big Brother contestants participating as Teams for increased money and upscaled prizes.

Tig Notaro: Boyish Girl Interrupted August 22, 2015 Known for her distinctive storytelling and offbeat sense of humor, Tig Notaro often draws on her highly personal experiences with no-holds-barred honesty. Notaro tells stories about a number of subjects such as TSA screenings; searching for the perfect Santa Claus; and bringing her fiancée to meet her Mississippi family.

69th Annual Tony Awards June 7, 2015 The biggest Broadway shows meet pop culture in this live 3 hours that was filled with song, dance, comedy and more. 14 musical performances featuring a cast of hundreds and the presentation of 14 awards in the most entertaining award show on television.

U2: Innocence + Experience Live In Paris December 7, 2015 After the Paris Tragedy in November, U2 performed songs from their recent album along with many of their enduring hits in an unforgettable concert that was both spectacular and, paradoxically, highly intimate and personal. Special Guests, Eagles of Death Metal made an emotional return to Paris to perform with U2.

Whitney Cummings: I'm Your Girlfriend January 23, 2016 The comedian and actor dishes up an hour of audacious adult humor taped in front of a live audience at The Broad Stage in Santa Monica. Whitney's topics include; her experiences with money and power in relationships, birth control, her future plans for motherhood and "love addiction".

END_OF_DOCUMENT_TOKEN_TO_BE_REPLACED

Outstanding Directing For A Comedy Series

END_OF_DOCUMENT_TOKEN_TO_BE_REPLACED

Lighting Direction For A Variety Series

END_OF_DOCUMENT_TOKEN_TO_BE_REPLACED 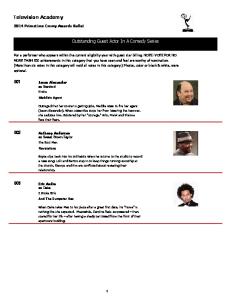