Objectives: On completion of this article the reader will be able to list the indications and limitations of diagnostic options in the evaluation of patients with suspected mitochondrial disorders. Accreditation: The Indiana University School of Medicine is accredited by the Accreditation Council for Continuing Medical Education to provide continuing medical education for physicians. Credit: The Indiana University School of Medicine designates this educational activity for a maximum of 1.0 hours in category one credit toward the AMA Physicians Recognition Award. Each physician should claim only those hours of credit that he/she actually spent in the educational activity. Disclosure: Statements have been obtained regarding the author's relationships with financial supporters of this activity. There is no apparent conflict of interest related to the context of participation of the author of this article.

Mitochondrial disorders are a heterogeneous group of diseases that affect oxidative phosphorylation (OXPHOS). The OXPHOS system consists of five protein-lipid enzyme complexes located in the mitochondrial inner membrane. Electrons generated during the catabolism of proteins, carbohydrates, and fats are collected by complexes I and II and transferred sequentially to coenzyme Q1-0, complex III, and complex IV. Complexes I, II, and IV use the energy produced in electron transfer to pump protons across the inner mitochondrial membrane, generating a proton gradient that is used by complex V to condense adenosine diphos-

phate and inorganic phosphate into adenosine triphosphate (ATP),1.2 Both mitochondrial and nuclear genes regulate the production of the multicomplex OXPHOS system. The human mitochondrial DNA (mtDNA), inherited exclusively through the mother via the ovum cytoplasm, is a 16,569 nucleotide pair, double-stranded, circular molecule. The mtDNA encodes for two ribosomal RNAs (rRNA), 22 transfer RNAs (tRNAs), and 13 polypeptides of the OXPHOS system. Nuclear genes encode for the remainder of the compounds comprising the OXPHOS system, as well as all of the

components of complex II. Pathogenic mutations in both nuclear and mitochondrial genes are known to be associated with disease processes and have resulted in a complex array of inheritance possibilities for mitochondrial disorders.3 Many defects in OXPHOS are inherited in an autosomal recessive fashion, as in some cases of Leigh syndrome; a few are autosomal dominant4; some are sporadic (Kearns-Sayre syndrome)5; and others are maternally inherited such as mitochondrial encephalomyopathy lactic acidosis and strokelike sodes (MELAS) and myoclonic epilepsy and red fibers (MERRF).6,7 The cytoplasmic location of mitochondria results in the unique maternal inheritance pattern in which transmission of mtDNA occurs exclusively from a mother to her children. The resulting clinical phenotype in maternally inherited pathogenic mtDNA mutations is complicated and dependent on a number of factors, including whether or not the mtDNA sequences are present in a heteroplasmic (presence of mtDNA in a cell or tissue with more than one sequence) or homo plasmic (presence of mtDNA with one sequence) fashion. random segregation of mutant and wild-type mtDNA in dividing daughter cells when heteroplasmy exists and whether or not the mutant mtDNA reaches the critical threshold for energy production in a given cell line will determine the resulting clinical phenotype for the affected tissue and ultimately the patient. Disease expression in deleterious homoplasmic mtDNA mutations appears to be more complex and dependent on poorly understood genetic and environmental interactions. The resulting decreased ATP production in disorders affecting OXPHOS impairs various body functions. The organ systems most affected by a decrease in energy production are the central nervous system, cardiac and skeletal muscle, liver, and kidneys.1-3 However, although these body systems are more sensitive to a deficiency of ATP, other systems can develop problems as well. As such, individuals with mitochondrial disorders can show a wide range of symptoms including any combination of developmental delays, seizures, vision and hearing problems, autonomic nervous dysfunction, gastrointestinal difficulties including pseudo-obstruction, endocrinological problems such as diabetes and hypoparathyroidism, and failure to thrive (Table 1),8 The presentation of a particular mitochondrial disorder can therefore be extremely variable, even among affected individuals within the same family, making a diagnosis difficult.

can lead to failure of successful treatment of presymptomatic or early-stage disease processes seen with these disorders and results in increased morbidity and mortality for patients. In addition, familial variability often results in the failure to recognize significant recurrence risks that can lead to the subsequent birth of affected children to unsuspecting couples and families. The accurate diagnosis of such patients is therefore dependent on heightened awareness of suggestive clinical symptomatology, complete and detailed family histories, and interpretation of a battery of oftentimes complicated testing results. Although the clinical symptoms seen in patients affected with OXPHOS diseases are often variable, certain findings, patterns of abnormalities, or histories can be highly suggestive of these disorders. For example, mitochondrial disease should be suspected in any patient with seemingly unrelated multisystem problems. Others present with rare abnormalities often not seen in conjunction with other diseases (Table 2). For instance, strokes in children or young adults, especially associated with any other neurological difficulties, could indicate MELAS.6 Ophthalmoplegia would be of concern for Kearns-Sayre syndrome,S and movement disorders could suggest Leigh disease. Patients and families often report a history of "brownout" periods with intercurrent illnesses or surgery where normal functioning is decreased or lost until some time after wellness returns. On occasion, the patient may demonstrate a permanent loss of functioning following such stressors. Affected individuals may also develop a worsening of problems, such as an increase in seizure activity, or demonstrate difficulties, such as metabolic acidosis, requiring med-

ical intervention during seemingly minor illnesses. In general, patients with OXPHOS disease demonstrate long-term regression of skills and functioning. A lack of such history makes the diagnosis of OXPHOS disease for a given patient much less likely. A detailed extended family history is essential in helping the practitioner decipher sometimes subtle clues contained in a pedigree. An awareness of the clinical variability of OXPHOS diseases is crucial to prevent misinterpretation of family data, assignment of incorrect recurrence risks, and misdiagnosis. This is clearly demonstrated in a multigeneration family affected with the ATPase 6 gene 8993 T to G NARP (neuropathy, ataxia, and retinitis pigmentosa) mutation described by Tatuch et al. 9 The proband's parents sought genetic counseling prior to his conception because of a maternal history of Leigh disease. They were given negligible risks based on nonconsanguinity and a supposed autosomal recessive inheritance of the disorder. Following further investigation for his ataxia and developmental delay, the proband was found to have the NARP mutation. His younger sibling, born several months following his diagnosis, was also found to have the mutation and died from complications of his disease during early childhood. Further review of the family history noted that the maternal great-grandmother had late-onset retinitis pigmentosa and ataxia. All affected individuals in this pedigree were maternally related, indicating a maternal inheritance pattern associated with a significantly greater recurrence risk than autosomal recessive inheritance. In some cases, careful review of clinical symptoms and family history will result in identification of a described OXPHOS phenotype with subsequent confirmation of diagnosis by genetic testing on leukocyte and platelet mtDNA. However, most patients identified at risk for these diseases will also require procedures such as metabolic testing, skeletal muscle histchemistry, immunohistochemistry, electron microscopy, OXPHOS analysis on mitochondria isolated from skeletal muscle, and genetic screening for mutations in skeletal muscle mtDNA. Metabolic testing generally involves analysis of blood lactate and pyruvate, plasma carnitine, urine organic acids, blood and urine amino acids, and in some cases cerebrospinal fluid (CSF). Diagnostic information obtained from this complex battery of testing varies and can be difficult to interpret.

INTERPRETATION OF STANDARD METABOLICTESTING Patients who are being evaluated for OXPHOS disease typically undergo a multitude of standard metabolic tests that can be helpful not only in supporting the diagnosis but in determining the multisystem extent of the disease process and therefore possible treatment options. This battery includes blood lactate and pyruvate, plasma carnitine, blood and urine amino acids, and urine organic acids, and should include CSF studies such as lactate and pyruvate if the central nervous system is involved (Table 3). Urine metabolic screens provide limited information and are not useful in either supporting the diagnosis of or detecting multisystem problems in mitochondrial disorders. The significance of a number of testing results, in particular blood and CSF lactate and pyruvate values, can only be appreciated in light of an understanding of the normal metabolism oflactate and pyruvate, and lactate production in OXPHOS disease. During normal glycolysis and cellular respiration, glucose is converted into pyruvate through a multistep process. Pyruvate can also be generated during the catabolism of the amino acids alanine, serine, glycine, and cysteine. Pyruvate acts as a substrate for final ATP production in the electron transport chain following its conversion to acetyl CoA and subsequent entrance into the Kreb cycle. This process generates high energy electrons in the form of NADH and FADH2, and results in the production of 38 ATP molecules for each molecule of glucose metabolized. Under anaerobic conditions, pyruvate is shunted away from the Kreb cycle and converted to lactate through the action oflactate dehydrogenase, an NADHdependent enzyme. This alternative pathway only generates two molecules of ATP per molecule of glucose. In OXPHOS disorders, NADH generated during the catabolism of various substrates is unable to deposit its electrons in the defective respiratory pathway, leading to its accumulation. This accumulation then drives the conversion of pyruvate to lactate, resulting in an increase in lactate and pyruvate and in the lactate-topyruvate ratio. Disorders of pyruvate metabolism, namely pyruvate dehydrogenase deficiency and pyruvate carboxylase deficiency, can also cause a secondary rise in pyruvate and lactate because of interference in the conversion of pyruvate to other compounds. However,

these latter disorders typically do not cause an increased ratio oflactate to pyruvate. Although absolute increases in blood lactate and pyruvate, and in some cases CSF lactate and pyruvate, and/or in their ratio is suggestive of OXPHOS disease (ratio greater than 20), other disorders and circumstances can cause similar findings. Glycogen metabolism disorders, organic acidemias including propionic and methylmalonic acidemias, liver damage, and values collected after a seizure or during status epilepticus may also show elevated lactatelpyruvate (LIP) ratios. 10 Therefore, interpretation of LIP ratios should take into account a wide variety of aspects that include oxygenation status, cellular perfusion, and hepatic function. This is clearly demonstrated by the findings of Trijbels et al 10 who report a fivefold increase in blood lactate levels when children are resistant to venipuncture. They recommend placement of an indwelling intravenous cannula for collection of lactate after 45 minutes of bed rest. 10 Although impractical for most outpatient investigations, this merely reflects the sensitivity oflactate and pyruvate testing to other factors. This group also reviewed blood, urine, and CSF data collected on 23 patients with known defects in the pyruvate dehydrogenase complex or in the complexes of the respiratory chain. They determined that blood lactate values for any given patient could be intermittently elevated, stressing the need for repeated measurements. In addition, they noted that CSF lactate was most consistently elevated, particularly in patients with neurological symptoms, making this fluid the most reliable for the detection of abnormal patient lactate concentrations. lO In unpublished data, we have demonstrated that quantitative values of blood and CSF lactate and pyruvate are more accurately measured enzymatically and not by gas chromatography-mass spectrometry (GCMS) methods. In addition to the diagnostic value of blood and CSF lactate and pyruvate levels, these specific tests are also useful in the management of patients with OXPHOS disease because a number of treatment options, including the use of coenzyme

END_OF_DOCUMENT_TOKEN_TO_BE_REPLACED

How to spot mitochondrial disease in adults

END_OF_DOCUMENT_TOKEN_TO_BE_REPLACED 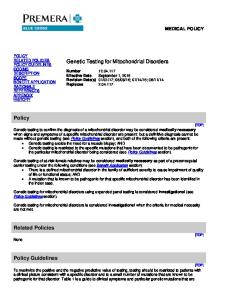 END_OF_DOCUMENT_TOKEN_TO_BE_REPLACED

The mitochondrial epigenome: a role in Alzheimer s disease?

END_OF_DOCUMENT_TOKEN_TO_BE_REPLACED

Mitochondrial Disease: Can Bioenergetic Disorders be Involved in Psychiatric Disorders?

END_OF_DOCUMENT_TOKEN_TO_BE_REPLACED 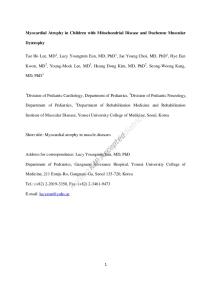 Myocardial Atrophy in Children with Mitochondrial Disease and Duchenne Muscular

END_OF_DOCUMENT_TOKEN_TO_BE_REPLACED

Is multiple sclerosis a mitochondrial disease?

END_OF_DOCUMENT_TOKEN_TO_BE_REPLACED

Testing the metabolic theory of ecology