During World War II, the German government run by Adolf Hitler and his Nazi Party systematically killed around 6 million people just because of their race or other aspects of their identity. As you read, take notes 1 on the relationship between prejudice and oppression during the Holocaust. [1]

The Holocaust was the systematic, bureaucratic, 4 state-sponsored persecution and murder of six million Jews by Adolf Hitler and his Nazi regime. Holocaust is a word of Greek origin meaning “sacrifice by fire.” The Nazis, who came to power in Germany in January 1933, believed 5 that Germans were “racially superior” and that 6 7 the Jews, deemed “inferior,” were an alien threat to the so-called German racial community.

During the era of the Holocaust, German authorities also targeted other groups because of their perceived “racial inferiority”: Roma (Gypsies), "Selection of Hungarian Jews at Auschwitz" is licensed under the disabled, and some of the Slavic peoples Public domain. (Poles, Russians, and others). Other groups were 8 9 persecuted on political, ideological, and behavioral grounds, among them Communists, 10 11 12 Socialists, Jehovah’s Witnesses, and homosexuals.

Oppression (noun): the cruel or unfair treatment of a group of people Systematic (adjective): carefully planned, organized, and carried out Officially organized, with many complicated rules Persecution (noun): harassment, oppression, or mistreatment, especially because of race or religion Superior (adjective): better than Inferior (adjective): not as good as; less important or worthy than As in “not native [to Germany]” (Not as in “from outer space”) Ideological (adjective): related to ideas and beliefs Communists are people who support communism, that is, the social, political, and economic system that seeks to create a society without social class by getting rid of private property. Socialists are people who support socialism, a social, political, and economic system similar to capitalism, that redistributes wealth and resources equally among everyone or creates communal, shared ownership of a country’s resources. A sect of Christianity that originated in America that believes, among other things, that law should be resisted when it conflicts with their religious teachings Women who are attracted only to women and men who are only attracted to men

What was the Holocaust? ; In 1933, the Jewish population of Europe stood at over nine million. Most European Jews lived in 13 countries that Nazi Germany would occupy or influence during World War II. By 1945, the Germans and their collaborators killed nearly two out of every three European Jews as part of the “Final Solution,” the Nazi policy to murder the Jews of Europe. Although Jews, whom the Nazis deemed a priority danger to Germany, were the primary victims of Nazi racism, other victims included some 200,000 Roma (Gypsies). At least 200,000 mentally or physically disabled patients, mainly Germans, living in institutional settings, were murdered in the so14 called Euthanasia Program. [5]

As Nazi tyranny spread across Europe, the Germans and their collaborators persecuted and murdered millions of other people. Between two and three million Soviet prisoners of war were murdered or died of starvation, disease, neglect, or maltreatment. The Germans targeted the non16 Jewish Polish intelligentsia for killing, and deported millions of Polish and Soviet civilians for forced labor in Germany or in occupied Poland, where these individuals worked and often died under 17 deplorable conditions. From the earliest years of the Nazi regime, German authorities persecuted homosexuals and others whose behavior did not match prescribed social norms. German police officials targeted thousands of 18 19 political opponents (including Communists, Socialists, and trade unionists) and religious dissidents 20 (such as Jehovah’s Witnesses). Many of these individuals died as a result of incarceration and 21 maltreatment.

Administration of the “Final Solution” In the early years of the Nazi regime, the National Socialist government established concentration camps to detain real and imagined political and ideological opponents. Increasingly in the years before 22 the outbreak of war, SS and police officials incarcerated Jews, Roma, and other victims of ethnic and racial hatred in these camps.

The German government and Nazi sympathizers—“Germans” does not include the German Jews, of course, or other Germans who did not believe in the Nazi regime’s ideas. Euthanasia is a method for medically killing someone, often by deadly gas or injection. Tyranny (noun): oppressive or unjust government usually ruled by just one person instead of a democracy The intelligentsia refers to the intellectual and educated members of society. Deplorable (adjective): very bad, worthy of criticism Trade unionists, also called labor unionists, are people who support the right for workers to bargain with their employers for fair wages, decent hours, and safe working conditions. Religious dissidents are people who practice religions that disagree with or branch off from long-established churches. Incarceration (noun): imprisonment Maltreatment (noun): poor treatment; abuse SS stands for Schutzstaffel, armed members of Hitler’s Nazi party in Germany.

To concentrate and monitor the Jewish population as well as to facilitate later deportation of the 25 Jews, the Germans and their collaborators created ghettos, transit camps, and forced-labor camps in order to keep Jews grouped closely together during the war years. The German authorities also 26 established numerous forced-labor camps, both in the so-called Greater German Reich and in 27 German-occupied territory, for non-Jews whose labor the Germans sought to exploit. Following the invasion of the Soviet Union in June 1941, Einsatzgruppen (mobile killing units) and, later, militarized battalions of Order Police officials, moved behind German lines to carry out mass-murder operations against Jews, Roma, and Soviet state and Communist Party officials. German SS and police units, supported by units of the Wehrmacht and the Waffen SS, murdered more than a million Jewish men, women, and children, and hundreds of thousands of others. [10]

Between 1941 and 1944, Nazi German authorities deported millions of Jews from Germany, from 28 occupied territories, and from the countries of many of its Axis allies to ghettos and to killing centers, often called extermination camps, where they were murdered in specially developed gassing facilities.

The End of the Holocaust ; In the final months of the war, SS guards moved camp inmates by train or on forced marches, often 29 called “death marches,” in an attempt to prevent the Allied liberation of large numbers of prisoners. As Allied forces moved across Europe in a series of offensives against Germany, they began to encounter and liberate concentration camp prisoners, as well as prisoners en route by forced march from one camp to another. The marches continued until May 7, 1945, the day the German armed 30 forces surrendered unconditionally to the Allies. For the western Allies, World War II officially ended in Europe on the next day, May 8, while Soviet forces announced their “Victory Day” on May 9, 1945. In the aftermath of the Holocaust, many of the survivors found shelter in displaced persons (DP) camps 31 administered by the Allied powers. Between 1948 and 1951, almost 700,000 Jews emigrated to Israel, including 136,000 Jewish displaced persons from Europe. Other Jewish DPs emigrated to the United States and other nations. The last DP camp closed in 1957. 32

Facilitate (verb): to help with the process of doing something; to make something easier Deportation (noun): forced removal from a country Ghetto originally meant segregated neighborhoods where certain groups like the Jews were forced to live according to the law. The German Reich is just another name for Germany, approximately meaning “German Realm.” Exploit (verb): to take advantage of In World War II, Germany and its allies Italy and Japan were called the “Axis Powers.” Liberation (noun): the act of freeing someone In World War II, France, the United Kingdom, the United States, and the Soviet Union (Russia) were called the “Allies.” Emigrate (verb): to leave one’s country Devastate (verb): to damage badly; to destroy totally

"Introduction to the Holocaust" from The Holocaust Encyclopedia, © 2016, The United States Holocaust Memorial Museum. Reprinted with permission, all rights reserved.

Text-Dependent Questions Directions: For the following questions, choose the best answer or respond in complete sentences. 1.

PART A: Which TWO of the following best identify the central ideas of this text? A. B. C. D. E. F.

PART B: Which phrase from the paragraph best supports the answer to Part A? A. B. C. D.

“Holocaust is a word of Greek origin meaning ‘sacrifice by fire.’” (Paragraph 1) “The Nazis, who came to power in Germany in January 1933, believed that Germans were 'racially superior' and that the Jews, deemed 'inferior,' were an alien threat” (Paragraph 1) “Although Jews, whom the Nazis deemed a priority danger to Germany, were the primary victims of Nazi racism, other victims included some 200,000 Roma” (Paragraph 4) “Between two and three million Soviet prisoners of war were murdered or died of starvation, disease, neglect, or maltreatment” (Paragraph 5) “Following the invasion of the Soviet Union in June 1941, Einsatzgruppen … moved behind German lines to carry out mass-murder operations” (Paragraph 9) “Nazi German authorities deported millions of Jews… to ghettos and to killing centers, often called extermination camps, where they were murdered in specially developed gassing facilities” (Paragraph 10)

PART A: What does the word “concentrate” most closely mean as it is used in paragraph 8? A. B. C. D.

The Nazi party oppressed people who were different from them by forcing them into camps. World War II was fought by Israel and Germany, who kept Jewish prisoners of war in horrible death camps. Only Jews were persecuted during the Holocaust, and no one defended them because they felt it did not affect them. The Holocaust was motivated by prejudice and organized by the government. The German Nazis were exercising their right to border control by deporting illegal aliens, but other nations perceived this as immoral. Socialists, Einstatzgruppen, Trade-Unionists, Communists, SS, disabled people, and Roma were all victims of genocide.

PART B: Which TWO phrases from the text best support the answers to Part A? A. B.

According to the text, what was the relationship during the Holocaust between prejudice against Jews and oppression (cruel treatment) of them? Cite evidence from the text in your response.

Discussion Questions Directions: Brainstorm your answers to the following questions in the space provided. Be prepared to share your original ideas in a class discussion. 1.

The Nazis and people who agreed with them wanted to protect the German community from “inferior” races. Are there other examples in history or literature in which groups of people murdered innocent people in the name of “protecting” themselves? How are these examples similar to or different from the Holocaust?

What might have made the Nazis murder, imprison, and oppress certain people? Do you think those people were really a threat, or could there have been other motivations?

In the context of this article, what makes people do bad things? Cite evidence from this text, your own experience, and other literature, art, or history in your answer.

The Holocaust is taught in history classes today so that people will never forget. Although it is not pleasant to hear about the murder of millions of people because of their religion, race, or beliefs, educators believe it is important to study. What can we learn from tragedy, and why is it important to study tragic history?

END_OF_DOCUMENT_TOKEN_TO_BE_REPLACED 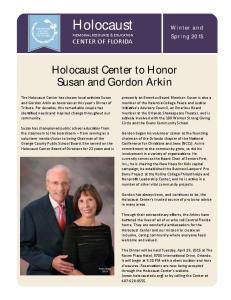 END_OF_DOCUMENT_TOKEN_TO_BE_REPLACED

THE HOLOCAUST, MUSEUM ETHICS AND LEGALISM

END_OF_DOCUMENT_TOKEN_TO_BE_REPLACED 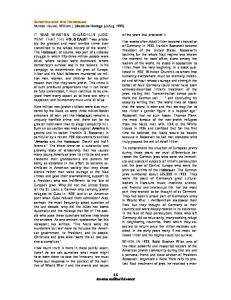 America and the Holocaust